Where are the female experts?

Gender balance in Working Group B

The CTBT Young Professionals Network (YPN) is bringing gender balance and women in the CTBT community into focus. Both statistics and the experiences of women working at the CTBTO and the National Data Centres (NDCs) reveal that there is great room for improvement in terms of gender equality, and the YPN calls for concrete actions to correct this imbalance.

On 9 March 2022, Jenifer Mackby addressed the Young Professionals Network and held a Science & Tech Talk about her inspiring career, the CTBT, and gender.

Jenifer  Mackby has worked on non-proliferation and international security issues at the Federation of American Scientists, Partnership for a Secure America, Center for Strategic and International Studies, and the Comprehensive Nuclear-Test-Ban Treaty Organization (CTBTO).

She served an important role as Secretary of the negotiations on the CTBT, the Group of Scientific Experts, and the Verification Working Group at the CTBTO.

“Pictures speak louder than words”, Jenifer Mackby said, while she talked about the lack of females during her own career experiences and in more recent CTBT activities.

Underrepresentation of women is a common issue in STEM fields

On the International Day of Women and Girls in Science 2022, the Young Professionals Network wrote that gender imbalance is a general problem in STEM fields. The YPN emphasized that the empowerment of women and girls brings in unique perspectives, new talents, and creativity in science and technology. Besides, ensuring equality and access for women enlarges the talent pool for National Data Centres and the Comprehensive Nuclear-Test-Ban Treaty Organization.

How is the situation in the CTBT sphere?

Women at the professional and higher level make up 36% of the staff at the Comprehensive Nuclear-Test-Ban Treaty Organization. The CTBTO says that they are working hard to achieve gender parity, and the Executive Secretary Robert Floyd describes himself as an International Gender Champion. 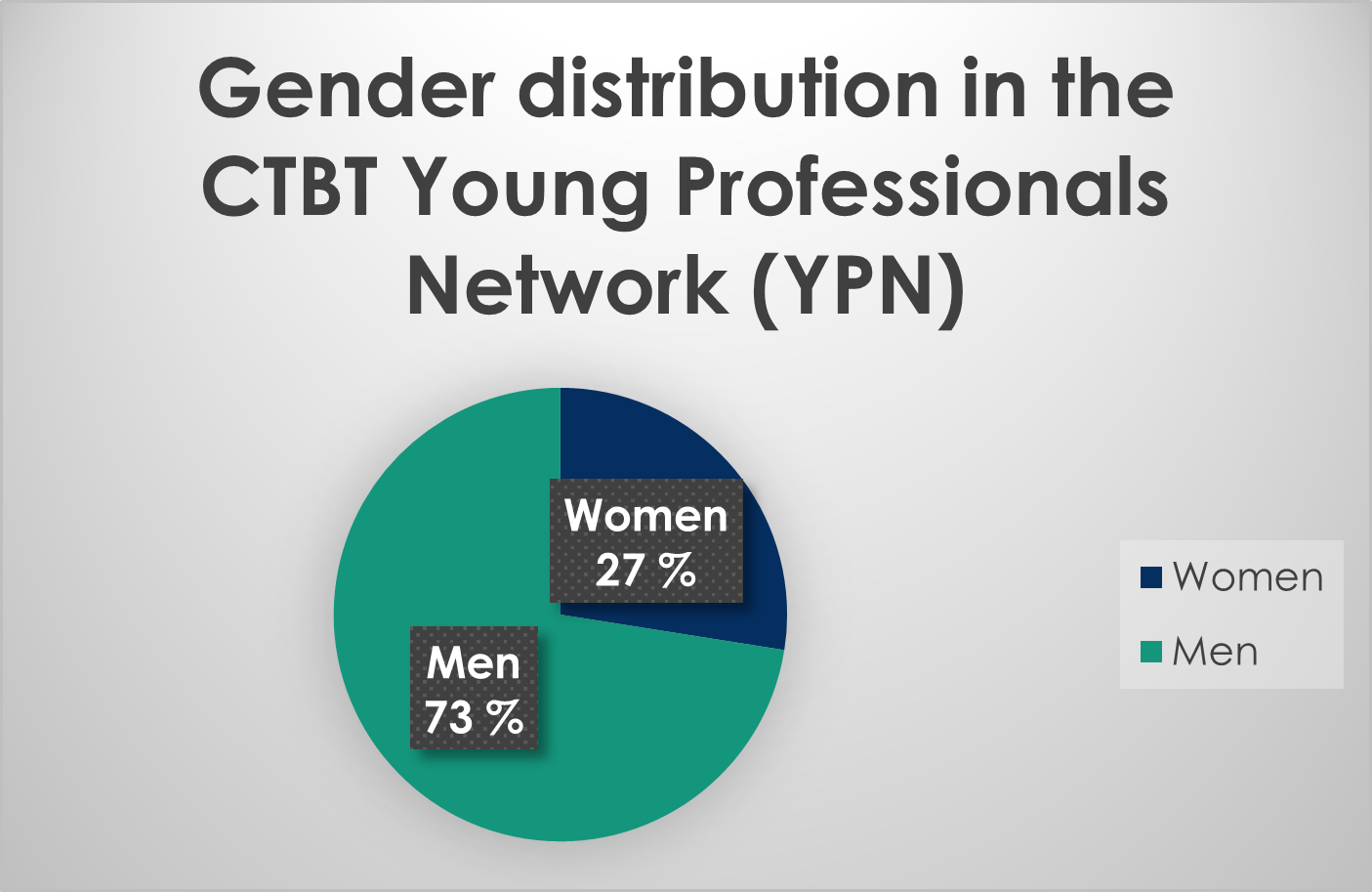 In the CTBT Young Professionals Network, there are currently 22 women and 58 men. During network events and “YPN Science & Tech Talks” there also seems to be a predominance of male participants and speakers.

The YPN provides a valuable venue for young professionals to grow scientifically and professionally, and the network has recently opened for associate membership to support the overall goal of ensuring that there will be a new generation of experts and leaders to take the work of the CTBTO forward.

Working Group B deals with the examination of verification issues for the CTBTO Preparatory Commission and consists of scientific experts and representatives from the State Signatories. The WGB sessions have traditionally taken place at the Vienna International Centre (VIC), but the COVID-19 pandemic forced a shift to virtual and later hybrid meeting set-ups.

Before WGB 58, the YPN informed about the possibilities for participating online, highlighting that it is an excellent opportunity to learn and get an impression of what Working Group B is about, the topics the State Signatories discuss, presentations by the PTS, and the general policy-making process.

Contrary to expectations, the switch to online modes of participation such as Interprefy has not contributed to narrowing the gender gap in Working Group B. In fact, it has remained unchanged.

Accordingly, it appears that the lack of female experts in Working Group B is tied to the NDC level.

How can we narrow the gender gap?

The gender gap in the CTBT sphere likely reflects general challenges associated with STEM fields. As such, the reasons behind the gender inequality are manyfold and rooted in structural and sociological conditions, e.g., gender biases, norms, and lack of support.

Jenifer Mackby pointed out that governments and National Data Centres are a part of the problem, and that they must be persuaded to send more women. The CTBT Young Professionals Network is an important arena for young professionals, and Mackby suggested that the network should actively work on outreach and expand the target groups to include scientific labs and universities.

Mackby’s YPN Science & Tech Talk led to an interesting round of reflections, and the participants mentioned several challenges and suggestions to narrow the gender gap in the CTBT sphere.

Concerning participation in Working Group B, some stressed that the conventional format of WGB implies traveling to Vienna for two weeks twice a year, which only is suitable for people without partners and family responsibilities. Thus, shortening the duration of Working Group B and facilitating hybrid solutions could perhaps even out participation.

Lack of information, involvement, and outreach was also brought up in the subsequent discussion. Remarkably, one member asked if gender equality ever comes up in discussion at top levels, e.g., in Working Group B, because the message of need for female participation in WGB and CTBTO trainings was not communicated within their own organization.

Hence, messages in high-level speeches are meaningless if the information is not distributed to the relevant institutions and groups.

The CTBT Young Professionals Network can play a key role in spreading information about opportunities and has already encouraged its members to investigate the possibilities of joining their national delegations during WGB. Moving forward, the aim is to increase outreach and inform about the existence of the YPN.

Gender equality in science is important. The CTBT Young Professionals Network calls for concrete actions to reduce inequality in the CTBT sphere, and wants to know

Answers can be sent to [email protected]